Rendering is the process where the edited clips are saved into a single complete video clip. During the rendering process the video can be compressed and converted to a number of different video formats (aka codecs).

The rendering dialog is brought up from the render button

, from selecting Render in the Project Menu or by the Ctrl + Enter shortcut. 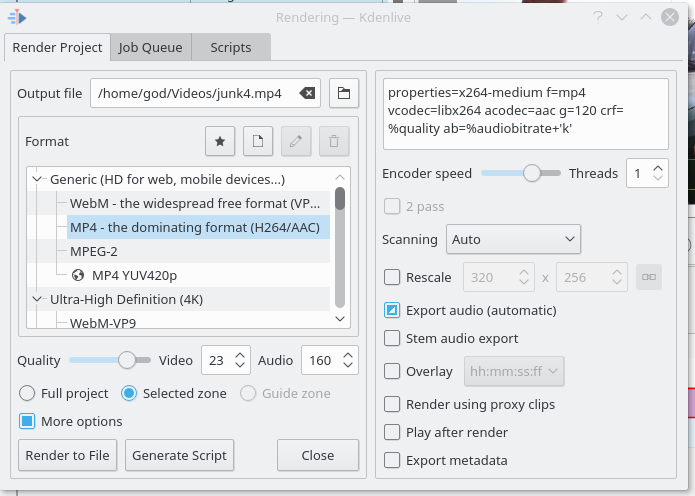 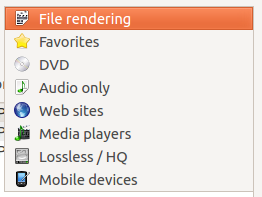 Version 0.9.10 of Kdenlive changes the render dialog significantly because it implements a method where you can choose to render the project with either a variable video bitrate (VBR) or a constant video bitrate (CBR) 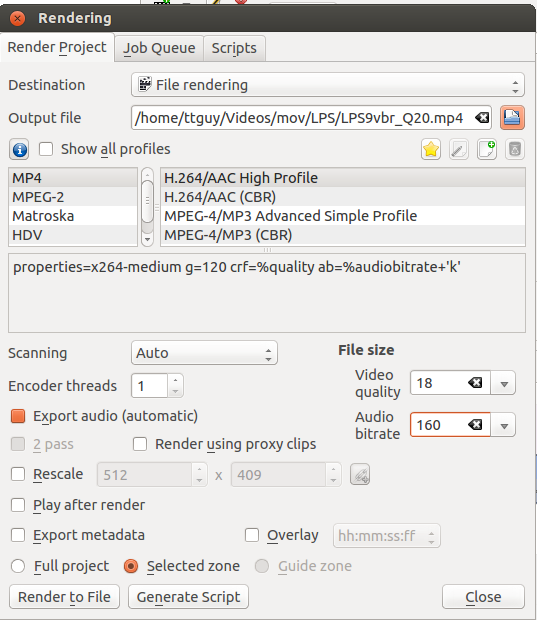 When a variable bitrate profile is selected, the File Size section displays a drop down for choosing the Video quality you want. This quality figure is a codec-dependent number representing the quality of the video that will be rendered. Generally, lower numbers mean higher quality video and larger file sizes (e.g. x264, MPEG2, VPx), but some codecs use opposite order (e.g. Theora). Profiles provided with Kdenlive offer these numbers ordered from best quality (almost lossless) to lower quality (still not degrading too much). The exact file size that is produced can not be predicted when using the VBR method. The idea behind this is that you specify a certain quality of video that you want through the entire video and the encoding optimizes bitrate to give you that constant quality, lowering data size for low action scenes and using more bits for high action scenes. 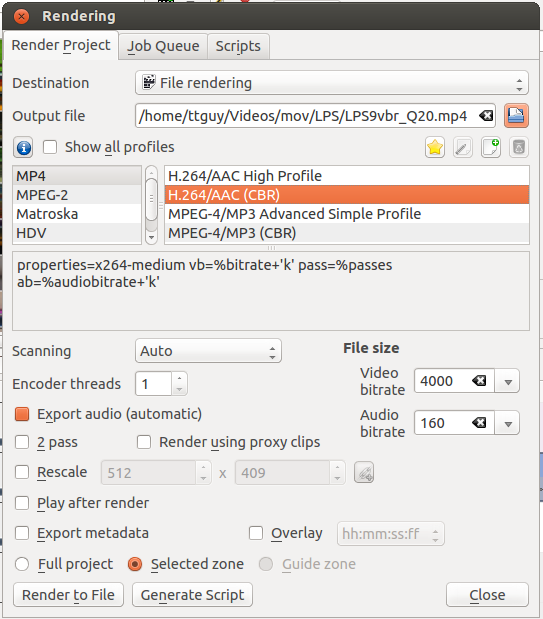 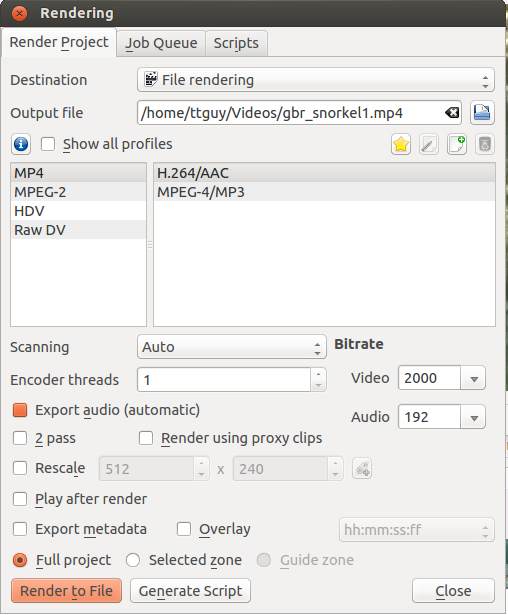 Create chapter file based on guides enables chapter markings on your DVD. Chapters work with the "next" and "previous" buttons on the DVD player and can populate scene selection menus. In order to create chapters this way you need to have marked chapters with guides on timeline. DVD wizard enables marking of chapters also during DVD creation step. 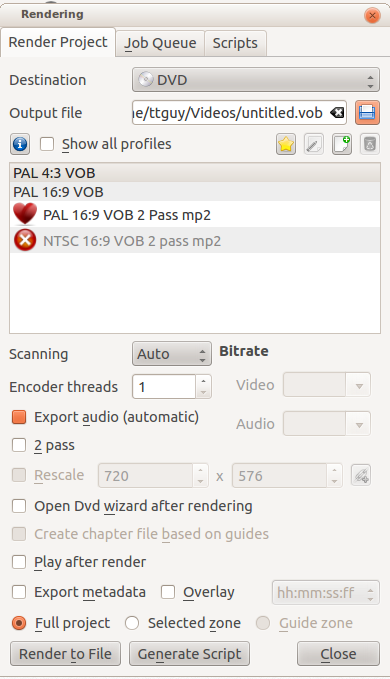 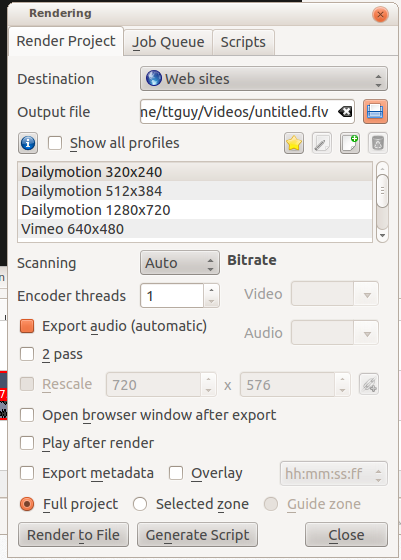 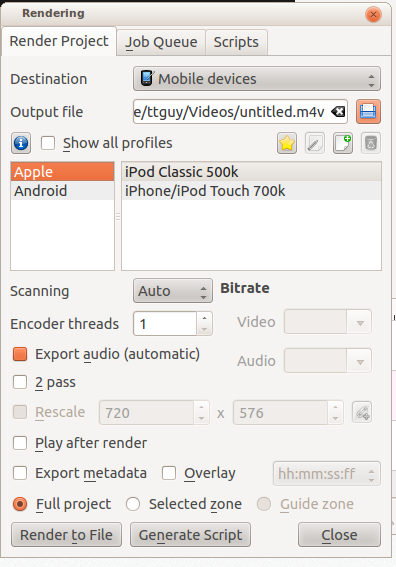 You can create your own custom render profiles by clicking the button highlighted in the screenshot below. 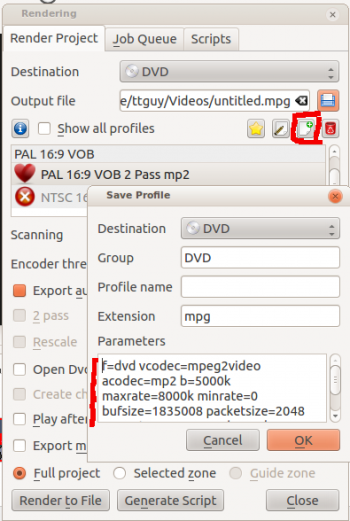 button. You can edit values in the parameters and save your own custom render profile.

The parameters in the rendering profile are melt parameters. For an explanation of their meaning, check the melt documentation or type melt -help in a command prompt.

The above screenshot shows the Save Profile dialog as it appears in vers <=0.9.4 of Kdenlive.

In version >=0.9.5 there is an improved version of the Save Profile dialog (see below) which allows you to customize the bitrates that are offered in the render profile. 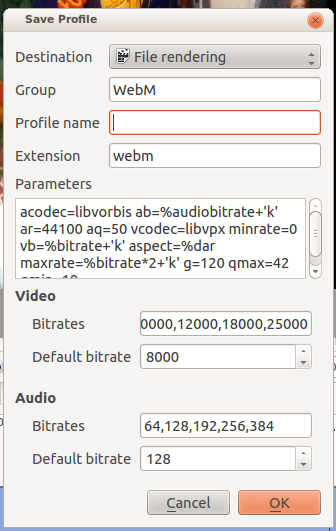 See also Render Profile Parameters - How to read them

If you have a lot of rendering jobs to do, you can use Kdenlive to create rendering scripts which you can accumulate and then execute in batch mode overnight. See Rendering Using Rendering Scripts. 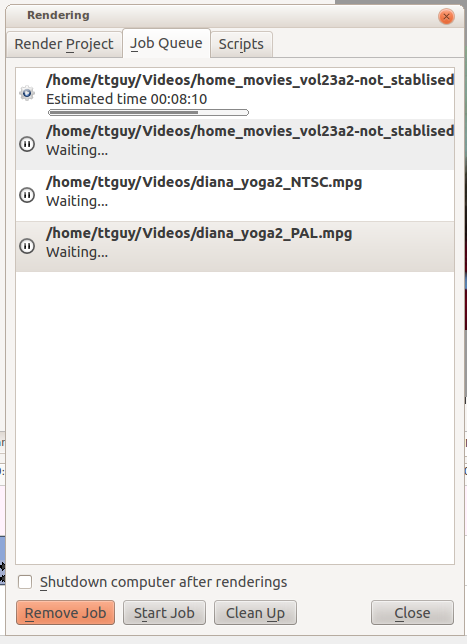 This makes use of Guides to define a region of the project that is to be rendered. See Rendering Using Rendering Scripts.

If you select the Selected Zone radio button from the bottom of the render dialog, Kdenlive will only render that portion of the project which has a selected zone created for it. See Creating Zones in Project Monitor

This option overlays a time code or frame count over the rendered video. This will put the overlay over the entire rendered project. Alternatively you can use the Dynamic Text effect to overlay selected regions of the video. 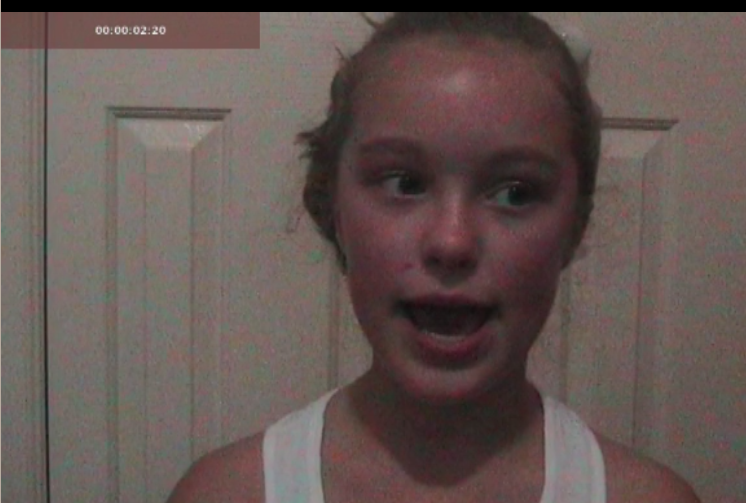 Check this to have the metadata which has been entered under Project Settings- > Metadata placed into the metadata of the rendered file.

In version 0.9.6 for Linux, you have to double-click the data area of a metadata field line to make the field available for input.

This image shows metadata settings for a project: 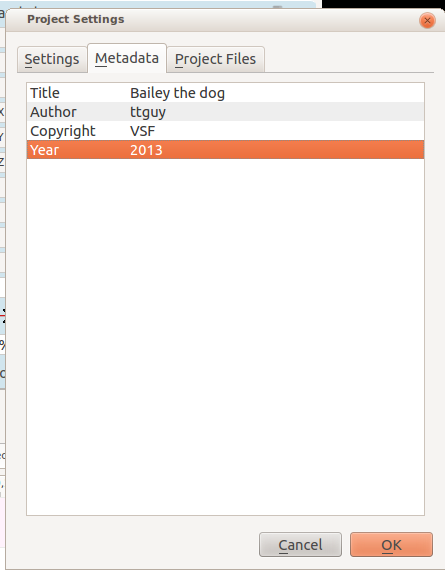 And this is the metadata on the resulting clip (rendered with Export Metadata checked). 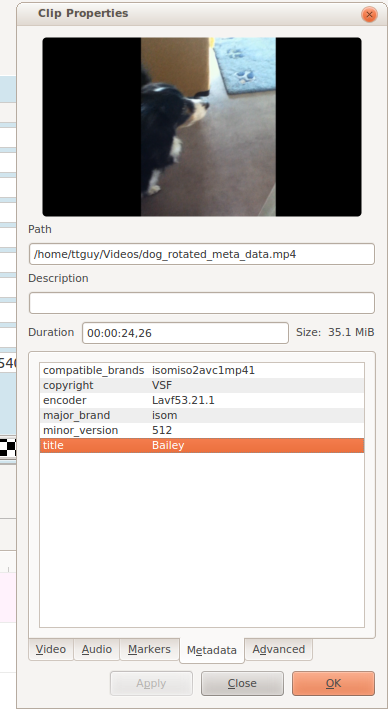 This reveals a bug in ver 0.9.4 of Kdenlive - the full title is not placed in the metadata - it is truncated at the first space. This has been fixed in 0.9.5 of Kdenlive as Mantis number 2996.

This is an unusual one. Instead of a normal on/off checkbox toggle, the Export Audio checkbox cycles among three choices.

As if that weren't confusing enough, the Export audio (automatic) option may appear different depending on your combination of distribution, desktop environment and theme. See three examples below:

Regardless of how the checkbox on the Export audio (automatic) option may appear on your installation, rest assured that when that option is showing, it is enabled.

So what do the three options mean?

Export audio, when checked, means write an audio track in the rendered file even if there is no audio track to write.

Export audio, when unchecked, means do not write an audio track in the rendered file. FFprobe on file generated from an audio-less track using Export audio (automatic). Note only one stream — Stream #0.0 — a video stream. Kdenlive automatically detected there was not an audio track and so it did not write one.

FFprobe on file generated from an audio-less track using Export audio checked. Note two streams — Stream #0.0 and Stream #0.1 — the latter being an aac audio track. We forced Kdenlive to write an audio track even though there was not any source audio to write.

In cases where there is an audio track ... Determines the value of Encoding threads passed to melt. For encoding to certain codecs, namely MPEG-2, MPEG-4, H.264, and VP8, kdenlive can use more than one thread and thus make use of multiple cores. Increase this number to take advantage of this feature on multi-core machines. See melt doco - threads and melt FAQ on multi-threading.

This option controls the frame scanning setting the rendered file will have. Options are Force Progressive, Force Interlaced and Auto.


This page was last edited on 4 August 2019, at 11:46. Content is available under Creative Commons License SA 4.0 unless otherwise noted.