Difference between revisions of "Amarok/Manual/Playlist/DynamicPlaylists"

Some media players are designed to load the entire collection of music in a single playlist, then play it in random order, or search/ sorted, then queued. With a larger collection, this way of managing your playlist isn't efficient. Amarok's Dynamic Playlist is a better way to explore your music. 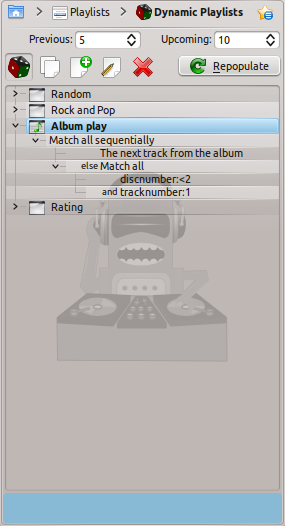 You can adjust the number of songs before and after the currently playing song to be displayed in the playlist with the Previous and Upcoming fields. You can prevent the same track appearing in the current playlist more than once using the

button. The Repopulate button allows you to generate a new set of tracks. This can be used together with a high Upcoming setting to generate fixed playlists for export.

Each dynamic playlist is built of biases. A bias defines a particular constraint on the behaviour of the dynamic playlist, and new items to be added to the playlist are selected at random from a list of all songs which match the biases. Biases may either be a single bias (e.g. the Search bias) or a grouping of other biases (e.g. the Match All bias). Some examples playlists are included, and you can define a new playlist with the

To change the name of a playlist, either use the 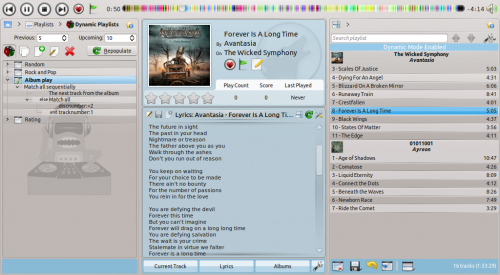 Below that is the dropdown menu for loading saved playlists, the

button to save playlists, and the

button to delete them. 
This page was last edited on 5 December 2012, at 09:58. Content is available under Creative Commons License SA 4.0 unless otherwise noted.