Using tools available in digiKam, you can simulate a number of effects, including bleach bypass. This effect produces a desaturated high-contrast image. Creating the bleach bypass effect in digiKam is done in two simple steps. Open a photo for editing and choose Color -> Hue/Saturation/Lightness. Specify the desired saturation value somewhere between -35 and -59, then press OK to desaturate the photo. 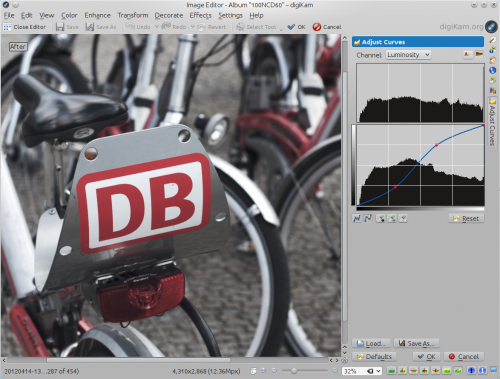 Choose then Color -> Curves Adjust, select Luminosity from the Channel drop-down list, and adjust the curve so it’s shaped as S. Feel free to experiment with the steepness of the curve to achieve the best result. As a starting point, you can download a ready-made S curve and import it into digiKam using the Load button.


This page was last edited on 16 June 2013, at 09:40. Content is available under Creative Commons License SA 4.0 unless otherwise noted.