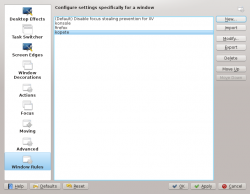 One may customize an application's windows by creating several rules. The first rules defined have more restrictive matching criteria and the final rule is used as a catch-basin: if no other rule matches for the window, use this rule.

Redo the above ... awkward


This page was last edited on 19 December 2011, at 17:35. Content is available under Creative Commons License SA 4.0 unless otherwise noted.