The first step is creating a new (empty) folder for our new project. I will call it quickstart-tutorial/ in this tutorial. Then get some sample video clips, or download them from here:File:Kdenlive-tutorial-videos-2011-avi.zip (7 MB)[1], and extract them to e.g. a quickstart-tutorial/Videos/ subfolder inside the project folder. 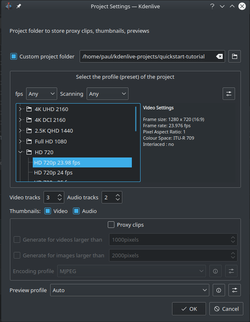 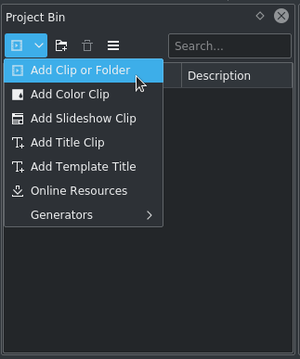 Now that the project is ready, let’s start adding some clips (i.e. the ones you downloaded). This works via the Project Bin widget; a click on the Add Clip or Folder icon

directly opens the file dialog, a click on the small arrow shows a list of additional clip types that can be added as well. Video clips, audio clips, images, and other Kdenlive projects can be added via the default Add Clip or Folder dialog. 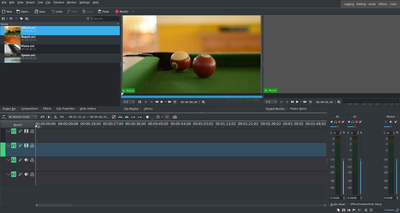 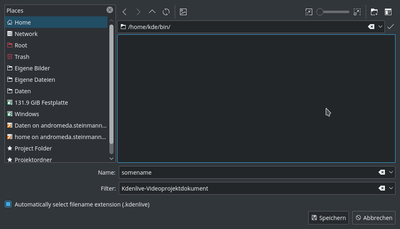 Now that the clips overlap, the transition can be added. This is done either by right-clicking on the upper clip and choosing Insert a Composition and choose Wipe or, easier, by hovering the mouse over the lower right corner of the Spoon clip until the pointing-finger pointer is shown and the message "Click to add composition" appears. The latter, by default, adds a wipe transition, which is in this case the best idea anyway since the Spoon is not required for playing.

The wipe transitions fades the first clip into the second one. See also Transition section of the manual.

Let’s now add the last clip, the Piano, and again apply a wipe transition. When adding it on the first track of the timeline, you need to click on the new clip’s lower left edge to add the transition to the previous clip. 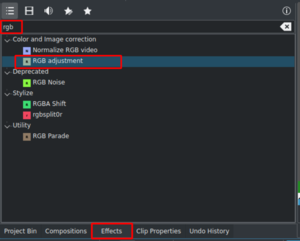 The Piano can be colourized by adding an effect to it. Select the piano clip, then double-click the RGB Adjustment effect in the Effects. If it is not visible, you can get it via View -> Effects.

Once the effect has been added, its name will be added to the timeline clip. It will also be shown in the Effect/Composition Stack widget. 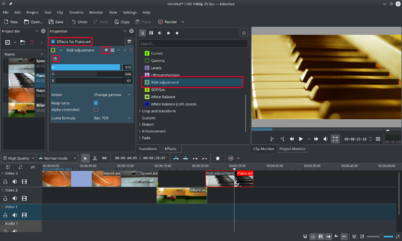 The values in the Effect/Composition Stack widget can be changed by using the slider (middle mouse button resets it to the default value), or by entering a value directly by double-clicking the number to the right of the slider.

The Effect/Composition Stack widget always refers to the timeline clip that is currently selected. Each effect can be temporarily disabled by clicking the eye icon, or all effects for that clip can be disabled using the check box at the top of the Effect/Composition Stack widget (the settings are saved though), this is e.g. useful for effects that require a lot of computing power, so they can be disabled when editing and enabled again for rendering. 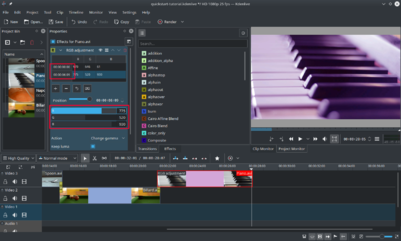 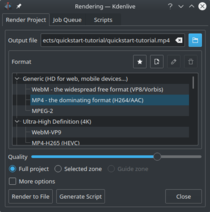 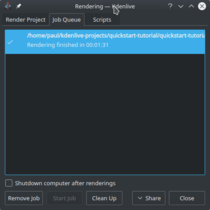 
This page was last edited on 8 May 2021, at 18:28. Content is available under Creative Commons License SA 4.0 unless otherwise noted.