Difference between revisions of "User:Fpuelz"

You can use KrossWordPuzzle to play crosswords or to create new crosswords. It can open and save *.puz-files (AcrossLite) and it's own *.kwp files (which are XML files) or *.kwpz (which are compressed *.kwp files). You can download lots of crosswords from within the game.

The library is shown after the game has started. If it's not shown, you can always switch back to the library by using the Library-tab on top: 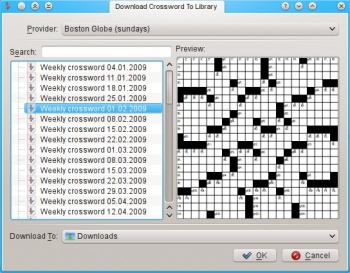 In the library click Import to import local crossword files to your library. You can also add crosswords to the library by dropping files, eg. from dolphin. The following file formats are supported:

In the library click Export to export the selected crossword. The following file formats are supported for exporting:

In the library click New Crossword, which will open a dialog. In the General tab you can choose a crossword type and set some information like the authors name (you) or the size of the crossword. You can also create user defined crossword types. See Crossword Types for an overview of the available crossword types. All settings can be changed later via Edit -> Crossword Properties.... 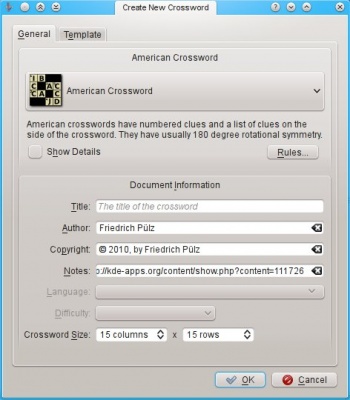 The general tab of the create new dialog

In the Template tab you can choose to use a template. Templates are complete crosswords, but without clue texts or answer letters. You can use them to quickly create new crosswords by just filling in the clues. If you have a good dictionary this can be really easy. 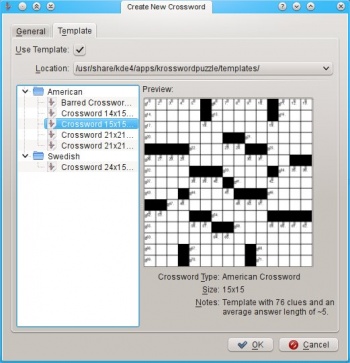 The template tab of the create new dialog

After clicking Ok the new crossword is created and shown in edit mode. See Editing Crosswords to see how to edit that new crossword.

First you need to have a MySQL server installed and running. TODO: More text here...

You can open the dictionary dialog via Settings -> Dictionary....

On the right of the dialog you can see a list of all words in your dictionary. Each word can have an associated clue text. On the left you can see a toolbox with three sections: Fill Dictionary, Edit and Backup.

To add words with their clue texts from existing crosswords you can use Extract From Library, which extracts all words from all crosswords in your library or Extract From Crosswords..., which lets you choose crossword files to extract words from. You can also add words (without clue texts) from plain text dictionary files using Add Words From Dictionary.... Normally /usr/dict or /usr/share/dict contains such dictionaries.

The Backup section contains two buttons: Import (CSV)... and Export (CSV).... These can be used to import/export the dictionary to/from comma seperated files (CSV). CSV-Files can also be imported with spread sheet applications. You can use those files as backup or to share your dictionary with others.

The rules tab of the crossword type dialog


This page was last edited on 13 January 2010, at 17:16. Content is available under Creative Commons License SA 4.0 unless otherwise noted.