Instant Preview(Previously known under the code name Level Of Detail/LOD strokes) is Krita's special speed-up mechanism that was funded by the 2015 Kickstarter. Krita slows down with really large images due the large amount of data it's crunching in painting these images. Instant Preview works by taking a smaller version of the canvas, and drawing the feedback on there while Krita calculates the real stroke in the background. This means that if you have a 4k screen and are working on a 4k image at 100% zoom, you won't feel any speed up.

Warning
Instant Preview requires OpenGL 3.0 support at minimum. So if you don't have high-quality scaling available in settings->configure Krita->display->scaling filter, then you wont't be able to use Instant Preview either. 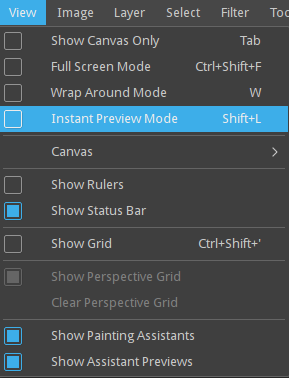 The Global Instant Preview toggle is under the view menu

Instant Preview is activated in two places: The view menu(shift+L), and the settings of the given paintop by default. This is because Instant Preview has different limitations with different paint operations.

For example, the overlay mode in the color smudge brush will disable the ability to have Instant Preview on the brush, so does using 'fade' sensor for size.

Similarly, the auto-spacing, fuzzy sensor in size, use of density in brush-tip and the use of texture paintops will make it more difficult to determine a stroke, and thus will give a feeling of 'popping' when the stroke is finished. 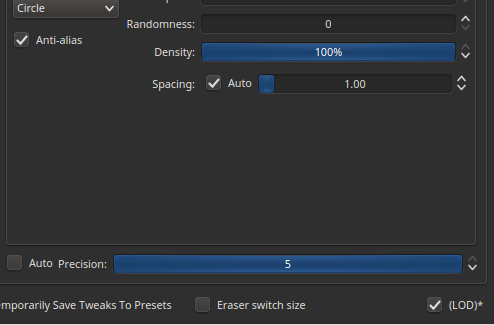 The Instant Preview checkbox at the bottom of the brush settings editor will give you feedback when there's settings active that can't be previewed right. Hover over it to get more detail. In this case, the issue is that auto-spacing is on.

Tools that benefit from Instant Preview


This page was last edited on 23 November 2015, at 19:02. Content is available under Creative Commons License SA 4.0 unless otherwise noted.