This effect can transform footage shot with a fisheye lens, to look like it was shot with a rectilinear lens, and vice versa. It can also be used to straighten the video that was shot with one of these wideangle converters, which are only slightly curvy, or with a semi-fisheye camera, like the GoPro hero. 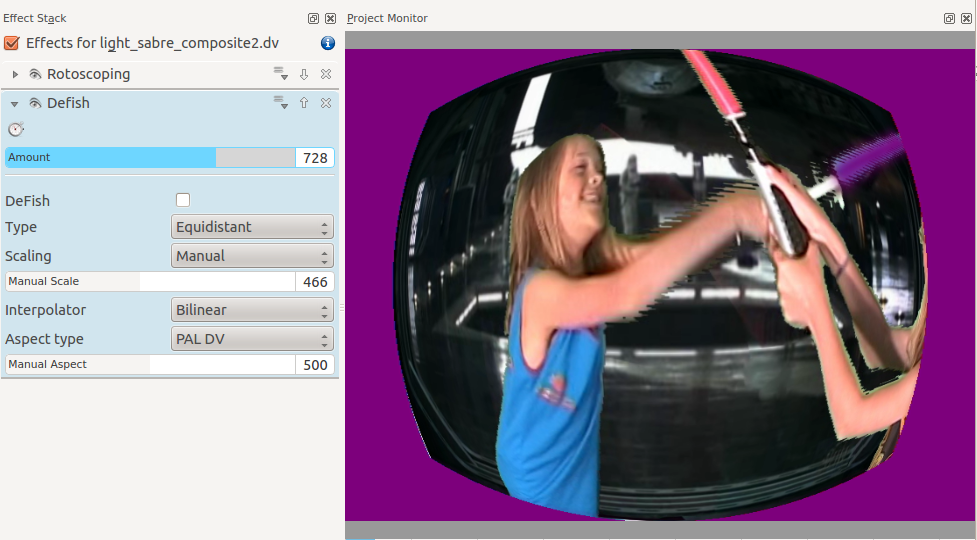 "Amount" Controls the amount of (de)distortion applied to the video. It controls the ratio of fisheye focal length to image half diagonal, but in an nonlinear inverse way, to make the control more "comfortable". It can be adjusted beyond "reasonable" values (which differ between the mapping function types), to produce some looney effects. When exploring this range, and the image disappears, check the scaling, could be that the image became too big or too small to see. For some unreasonable values the image might indeed disappear, when there are math overflows or imaginary results... (types 1 and 2 are more prone to image vanishing). Anyway, when working in the "special effect" range, it is always worth to try manual scaling. If the video contains zooming through a curvy wideangle adaptor, the needed amount will vary. In this case use keyframing.

If checked, the transform direction is from fisheye to rectiliear, when not checked, it is rectilinear to fisheye.

Wikipedia has a nice article about these.

Selects among seven different interpolators. This allows one to make a quality/speed tradeoff. The interpolators are ordered from fast, low quality to (very) slow high quality. The spline interpolating polynomials are from Helmut Dersch. For realtime use, option 0 is the fastest, in fact it is equal to no interpolation. In most cases bilinear should be good enough, and on a decent machine should still run in real time. Beyond bicubic, the quality gain is marginal for a single resampling. Lanczos takes an eternity!

1. Tweaking the parameters for best defish

Take a shot of something like a brick wall or bathroom tiles, that has a lot of horizontal and vertical straight lines. Be careful to keep the optical axis as perpendicular as possible to the wall (=keep a maximally symmetrical image in the viewfinder). Use this image to tweak the parameters, primarily amount, type and aspect.

2. Some examples of Defish0r abuse

These were tried with PAL DV. These examples work best, when there is some interesting action near the center of the image.

For a kind of roundish kaleidoscope, try this:

For an effect, reminiscent of some scenes from the "2001 Space Odyssey" try this:


This page was last edited on 22 June 2019, at 09:46. Content is available under Creative Commons License SA 4.0 unless otherwise noted.