All elements in this tutorial done by mouse

Welcome to the tutorial on Pixel Brushes, probably the most versatile brush.

Many brush engines may share similar elements like brush tips and dynamics, so this part on the Pixel Brush will also serve as a crash course to understanding the different brush elements. So, I won't repeat the corresponding parts for other brush engines. So, pay attention to this section.

I will address other brushes as they come.

Did I say that this was a "boring round brush"? Okay, I was way wrong about that.

Autobrush has 2 shapes and 3 modes:

I will actually start with the simplest case: the Gaussian brush.

Since this is the simplest brush mode, I'll use this as the base case to describe all the common options. 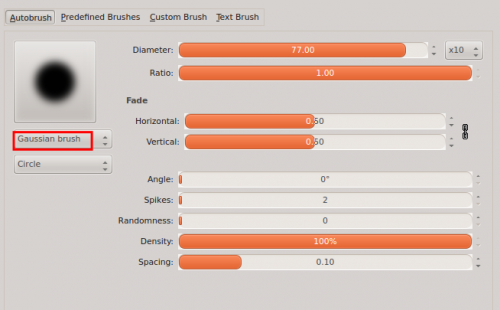 Tip: As with everywhere else, Right-click over numerical values to type values manually. 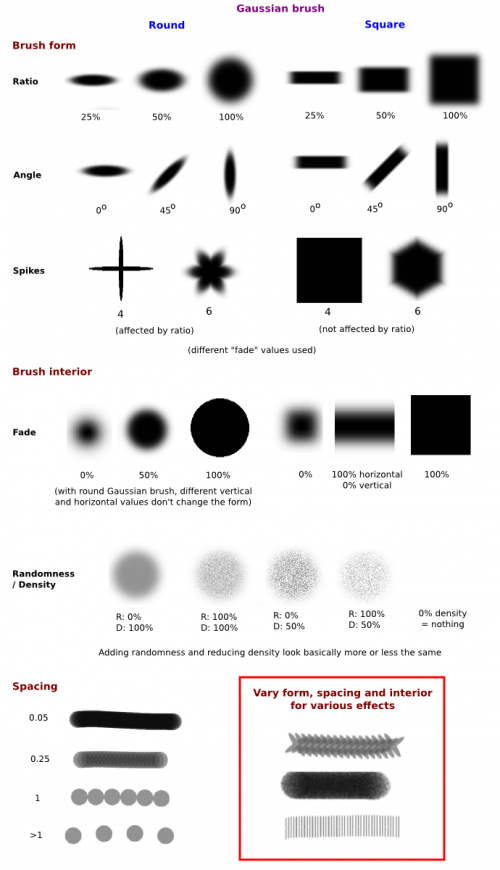 That was the most simple brush tip mode. That's before adding dynamics.

Now that we have an overview of brush options, I'll skip most of them. There are basically two major differences with Gaussian:

This curve basically sets the opacity of the brush, from the center to outwards.

And this allows for all sorts of interesting results. 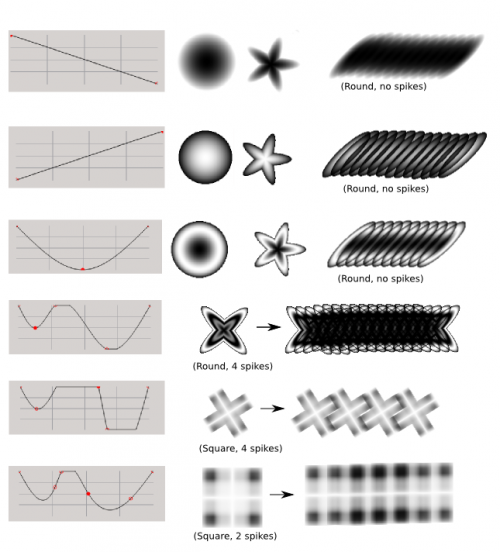 To delete a point, select and press delete.

Basically, playing around will give all sorts of weird shapes. You may wonder what it's all for right now, but it gets really interesting when you add dynamics. More on that much later.

On first glance, nothing out of the ordinary. A comparison:

You can unlink the Fade values. The round brushes will give the following: 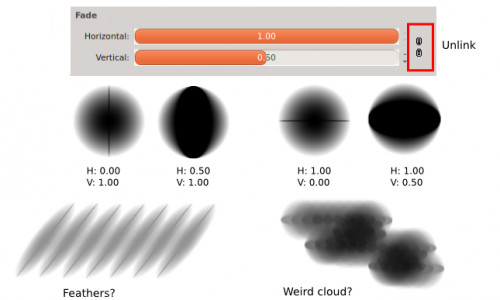 Things get really weird, though, when you do this for the square brushes: 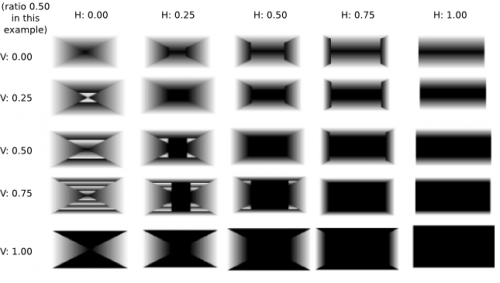 Well okay, but what are they For? Well, by varying the ratio, spacing and the density, you can obtain a whole range of geometric designs. 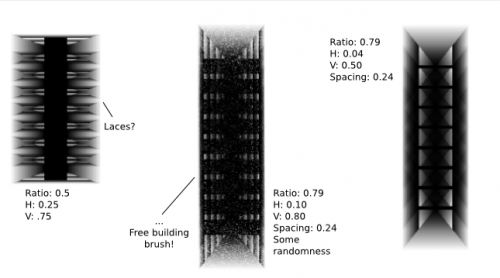 And now that we're done with those boring round brushes, we're moving on to the next category of brushes: predefined brushes. For my own convenience, I like to divide Kritra's predefined brushes into the following, non-official categories: 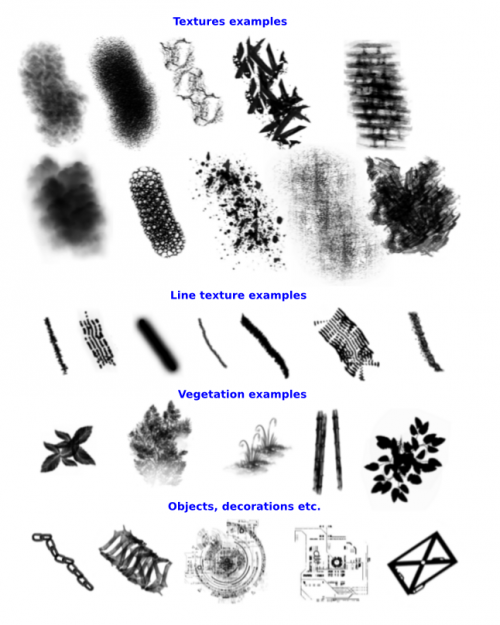 There are nearly 200 predefined brushes in Krita, so including all of them in this tutorial is wholly unreasonable. Instead of stuffying them into this tutorial, I'll point you to the ref sheet I made.

I suspect this wasn't higher priority before because everybody's using brush presets, for which the search is excellent.

If you've deleted any predefined brushes by accident, refer to my previous tutorial for how to get them back.

Those of you who have tested the brushes may have noticed a quite large portion of animated / multi-frame brushes. In fact, you can find 3 brush types in predefined brushes: 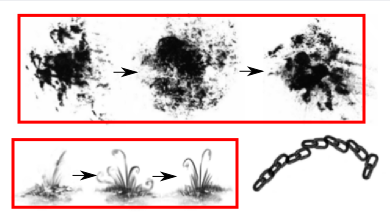 Just keep this in mind for now, because you can make them in Krita! More in the part on Custom Brushes.

Krita also allows you to use color images as brushes, or convert it to a normal brush: 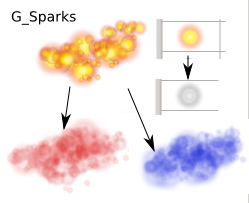 With Use color as mask on, the previously color brush behaves like a normal brush

Note
Turning this option on will also turn the preview of the brush into a grayscale preview. Turn the option off again to restore preview color.

The remaining options are pretty much self-explanatory:

You may want to vary the spacing for some of the brushes.

Now let's say you want to make your own custom brush tips! The following may seem long, but it's basically "draw your brush on a transparent layer, select it and use it as a custom brush." It takes less than a minute.

Before that, Krita has two ways of selecting the custom brush area:

Note: It is actually quite hard to synchronize the spacing and the mirror dynamic, so for these sorts of brush just create a two-layer animated brush instead.

For static brushes I will address the first method, and describe the second one with animated brushes.

1. Make a new, transparent layer, and turn off the visibility of other layers. 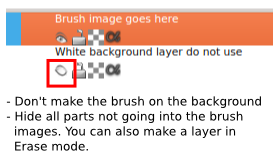 Krita will use all visible parts on all layers within the selected area, so you have to make sure nothing else is visible in that area. This includes the background (bottom) layer: it must be hidden too.

Note: Speaking of the background layer, don't draw your custom brush on it. For some reason Krita won't constrain to selection on this layer.

Tip: To hide excessive areas, there are 2 ways:

2. Draw your brush shape on this transparent layer.

3. Switch to a selection tool, and select the area around your brush shape. 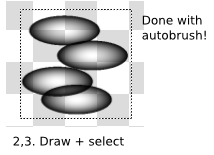 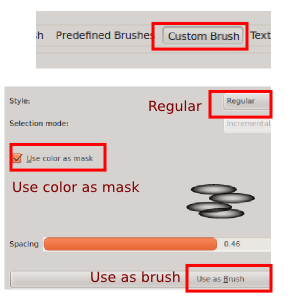 5. Click Use as brush and check Use color as mask. Make sure the style is regular. Adjust spacing.

6. Return to the canvas, and Shift + Ctrl + A to undo the selection. You can also turn the other layers visible again.

But of course, you remember that Use color as mask toggles between two modes:

Note: Be sure your brush preview is drawn on transparent background, or the white background will also be included in the brush. You also have to turn off the visibility of the background layer, which is usually white and fully opaque.

Basically you didn't save it twice, so don't delete it.

Making custom animated brushes is a lot like making static ones, though as I said earlier:

1. Animated brushes ignore selections. Instead it will be the same size as the whole image. So make a new image of the size of the brush.

2. Make each frame on a separate, transparent layer. Krita will ignore layers with visibility turned off. 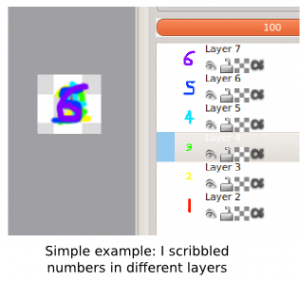 All this and we're Still at brush tips, but the final option, text brush, is thankfully much more simple. 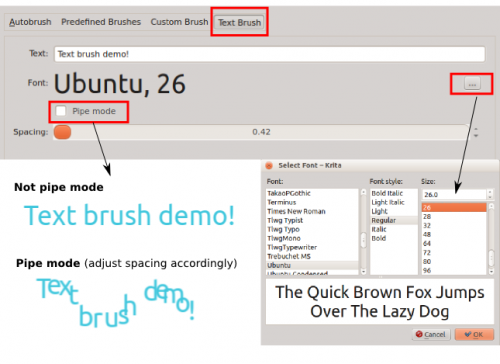 That's it with brush tips. On to other things!

The following features aren't grouped in the same sections of the brush editor, and that's because they aren't necessarily related features.

However, I've decided to make a section for this because they all somehow impact the drawing behaviour, perhaps even more so for mouse users.

I remind you again: you can right click the value to type in a number manually. Make sure your mouse is still over the box when you type "enter": it will unselect if you move away.

As you can see in the examples to the right, if you hold down the mouse button and draw over a big area several times, you end up with a boring, uniform area, of the opacity defined by the opacity bar. This isn't a problem for tablet users, who can:

That's where flow comes in.

With Flow less than 1:

It may look as though spacing is increased, but that's just an illusion.

Adjusting flow allows you to preseve more of the texture, and obtain a wider range of opacity within a single stroke. Depending on the brush tip and spacing, the effect can look either like an airbrush (though Airbrush mode is something different) or a soft watercolor stroke.

Until now we've been using the default, "Wash" mode. Build-up mode allows you to add to a stroke each time you pass over it.

The example below should say most of it:

See any difference? Neither can I. Basically, in Normal blending mode, the following two work about the same:

However, this is no longer the case with blend modes other than Normal. On the contrary, in build-up mode, a stroke's composite mode can affect itself.

There are too many possibilities and the results are quite unpredictable most of the time, so I'll leave you to play around with the settings.

In the brush editor: 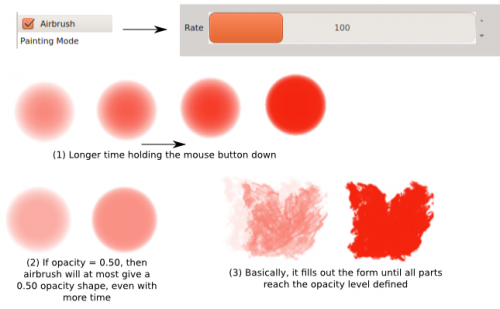 Airbrush is affected by the following parameters:

Wait a moment, that sounds kind of pointless! Not really, the form filling takes time. In the meantime:

Well okay. Is that it? No, here are a few more things that affect it:

Unfortunately the "Time" setting for dynamics doesn't update the brush instances. Krita will just pile on copies of the same instance rather than make new ones (which is a feature too).

You can modify blend modes either:

Now, with Krita, the default setting basically drops the same color with various levels of transparency. However, this is no longer the case with other blending modes on, especially in build-up mode.

The following examples were done by passing over the same areas several times in build-up mode:

When used properly, blending modes can therefore save you a few trips to the color picker. 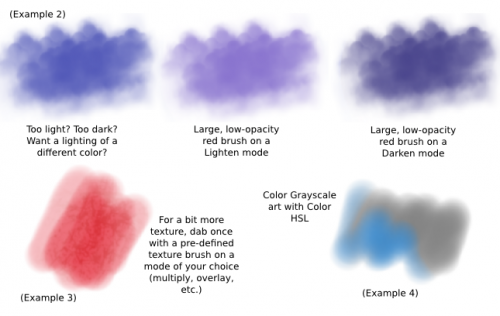 Blending effects are often quite unpredictable. In fact, they are strictly speaking mathematical modes, not artistic ones. They just happen to produce nice effects from time to time, so play around to see what you can get.

The second part of this tutorial is here: Tutorial: Pixel Brushes II


This page was last edited on 30 March 2015, at 13:27. Content is available under Creative Commons License SA 4.0 unless otherwise noted.