On default, there are four columns in the project explorer showing the name of the object, its type (Spreadsheet, Worksheet, etc.), the creation date and additional comment that can be provided for every object: The example below shows the same project structure as in the previous example but only with object names and comments shown: 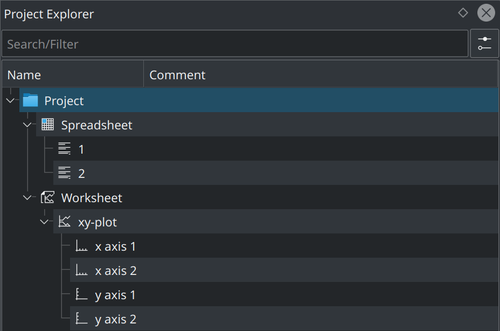 The parent-child hierarchy mentioned above can be further structured with the help of folders. Similar to the concept of folders known from file systems, a folder in LabPlot serves as a parent container where other objects can be placed under.

At the beginning there is only one folder available in the project - the root folder representing the project itself. New folders are created similarly to other new objects via the context menu of the project explorer, etc. The screenshot below shows an example for how a project can be structured using folders: 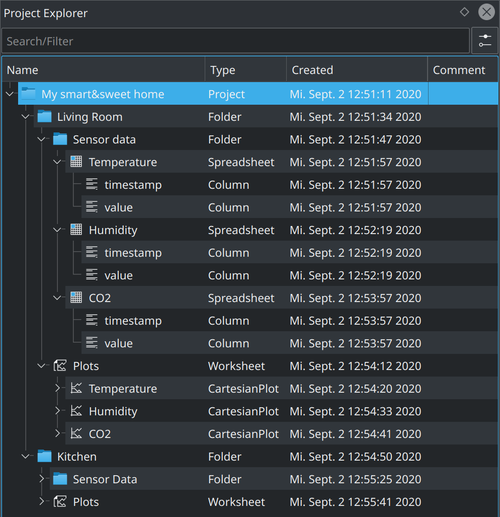 The project explorer provides basic search capabilities. By starting typing in the search/filter text field the content shown in the project explorer is limited to those objects only where the names are matching the current search string. Furthermore, with the option Case Sensitive and Match Whole Word the user can control the search behavior. 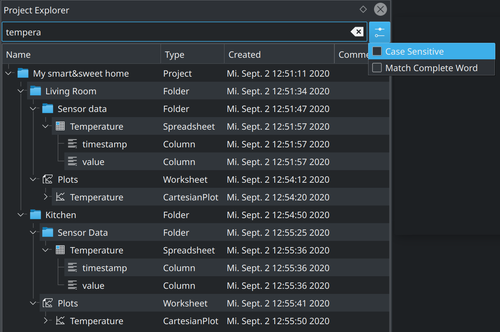 Drag&drop within the project explorer is possible. Because of the specific semantic meaning behind the different project objects, the source and the destination for such a drag&drop process cannot be arbitrary. The supported worklows are:


This page was last edited on 3 September 2020, at 08:44. Content is available under Creative Commons License SA 4.0 unless otherwise noted.
-->