Space brings up a submenu with Insert Space and Remove Space options. Inserting a space is a useful feature when you want to push all the existing clips on the timeline aside to make room for new clips but also want to preserve the relationships among all the clips that were shifted, including their transitions. 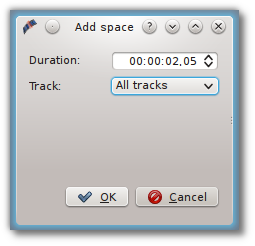 In addition to invoking this menu from Timeline->Space, you can also bring it up by right-clicking on an empty spot on a track in the timeline. There are a couple of important differences with how Insert Space behaves, though, depending on which method you choose. First, using Timeline->Space->Insert Space brings up the Add Space dialog shown in Figure 1 where the default choice for Track: is All tracks. 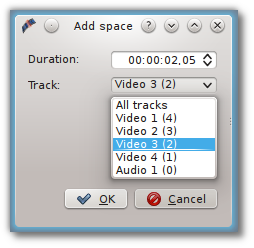 When you access the menu by right-clicking on a track, the same dialog appears but the default is the track you clicked on. In either case, you can obviously override the default by picking another option (Figure 2). The other difference is that the insertion happens at the playhead when the operation originates from the Timeline menu; it takes place at the mouse cursor position when right-clicking.

And in case you're wondering, the default Duration for the inserted space is 65 frames, which is not configurable in the Kdenlive or Project settings. 65 frames will equate to different amounts of time depending on the frame rate set in your project profile. In the example, our project's frame rate happens to be 30 fps and that's why the default Duration works out to be 00:00:02.05. 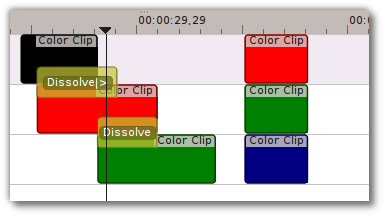 Let's look at an example, albeit an unrealistic one, of how inserting a space from the playhead position will affect clips and transitions on different tracks. In general, inserting a space will shift any clips that the playhead is touching as well as all clips to the right of the playhead on the affected track(s). Transitions are a little trickier because they span two tracks. The are assumed to “belong” to the higher track (regardless of the direction of the transition) and so if the playhead is touching them, they will go if the higher track is included in the shift. Figure 3 shows a scenario with clips on three video tracks before inserting a space. All of the following examples assume we're starting from this postion. 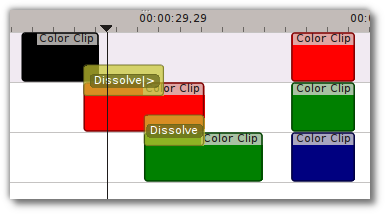 In Figure 4, we have chosen to insert a space on All Tracks. Since the playhead was touching both transitions and the color clips on tracks 2 and 3, it shifted them, along with all the clips to the right of the playhead. It did not shift the black clip on track 1 because it was to the left of the playhead. 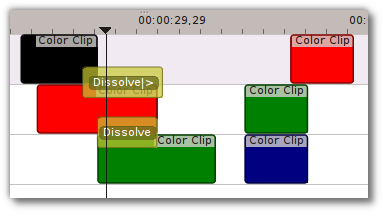 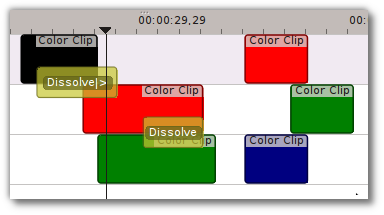 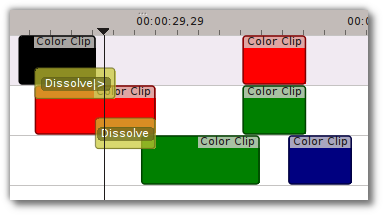 Finally, In Figure 7, we chose track 3 and just the clips move.

If we had started this process by right-clicking on a spot on track 1 or track 3 which corresponds to the playhead position in the example, the results would have been the same.

Remove Space is not the exact opposite of Insert Space.

There are the following differences:


This page was last edited on 1 February 2015, at 01:50. Content is available under Creative Commons License SA 4.0 unless otherwise noted.