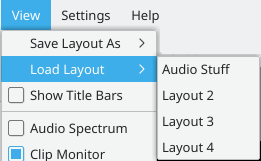 Lets you switch to a previously saved custom layout. Once you load a saved layout, that layout will remain the current one when starting Kdenlive until you switch to another saved layout or modify the current one. If you do make changes to a custom layout after loading it and then quit Kdenlive, you will not be prompted to save your changes to the named layout. The changes will be remembered and applied the next time you launch Kdenlive, but be aware that you are now working with an unnamed layout. If you like the layout and want to preserve it, save it back to the original name or save it as a new name.


This page was last edited on 6 May 2019, at 14:47. Content is available under Creative Commons License SA 4.0 unless otherwise noted.