The Sketch brush is easily the most fun brush to sketch with in Krita. LukasT originally adapted the Sketch brush from Project Harmony, which in turn was inspired by Scribbler.

In fact, LukasT already has a nice presentation of the Sketch Brush.

For this reason I won't spend too long explaining the settings.

To better explain this, I have set the brush visualization to "outline." You can do so too at: Settings -> Configure Krita -> General -> Cursor Shape -> Brush outline.

When using the Sketch brush, think of it in 2 parts:

Also, by default, the Sketch Brush uses the Build Up painting mode, and a default opacity of 30%. This combination is what allows for the natural-looking variations in opacity. Here are some comparisons:

Brush tip: the area of effect, and related dynamics

In theory, you can create different effects by using different forms of brushes. In practice, however, it is difficult to control this to create any specific effect, so you may as well just stick with the round brush.

One possibility, however, is to use an ellipse brush, and set Rotation to Drawing Angle. What this does is prevent curve lines from forming by preventing the area of effect from touching the rest of the line, to a point:

The Brush size tab controls the actual output of the rendered lines. The main options here are:

Each of the above three have corresponding dynamics. 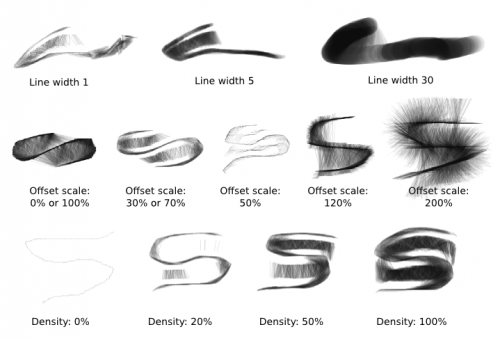 What's more, you will find the following options: 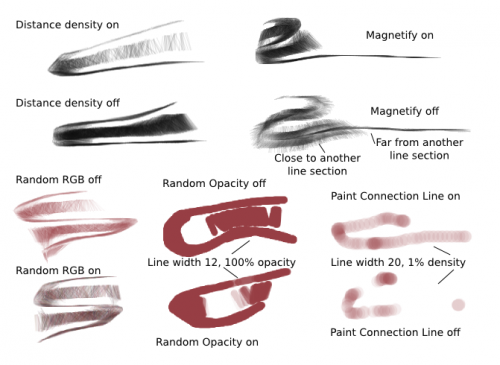 Basically, the options with effects that are actually visible are Distance density, Magnetify and Random RGB. You can ignore the rest. You also have:

Finally, there's a dynamic option called Airbrush mode. This allows you to make the line curves more opaque by pausing the mouse in an area. The effect is subtle:

You can use the sketch brush to create a variety of traditional media like effects: pencil, pen, marker, ink painting. You can use this to produce stand-alone sketches, or add shading to existing painting. 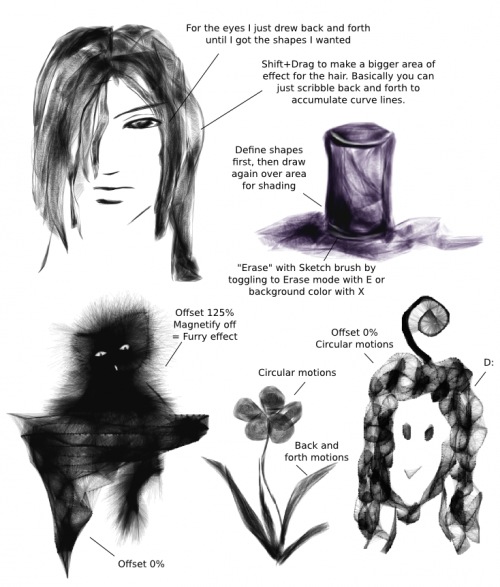 Apart from pencil-like shading, you can get other effects: 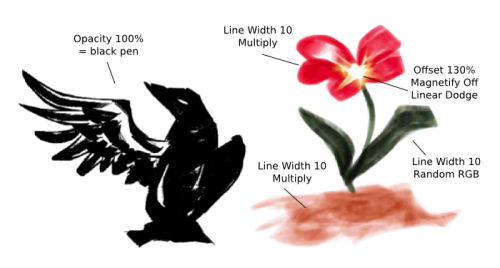 That's it for the Sketch brush!

This brush works best with a graphics tablet, but since my tutorials are mouse-only, I can't really describe all the effects. The Hairy brush is made up of a number of independent "bristles." When you use a graphics tablet, it will use the pressure setting to determine which bristles are touching the canvas, and only the ones touching the canvas are drawn. Each bristle can even take on different colors.

LukasT also has some info. 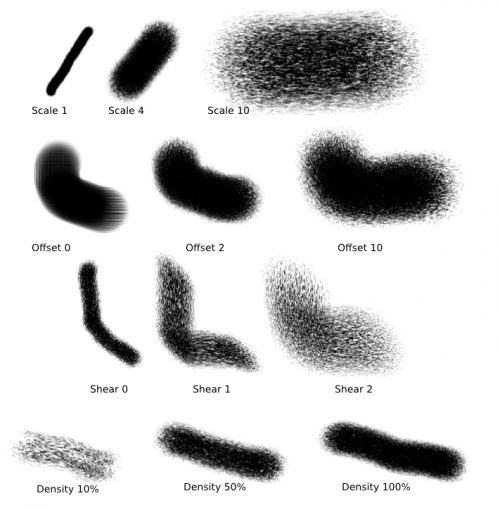 You have a number of options besides this:

The first thing you'll notice is the Ink Amount to the right. With Ink depletion checked:

These aren't quite visible with a mouse, and I'm not too sure how useful this is.

What's more interesting though is the last option at the top-right: Soak ink.

You don't need to have Ink depletion checked to activate this option, you just have to check Soak Ink. What this does is cause the bristles of the brush to take on the colors of the first area they touch. Since the Hairy brush is made up of independent bristles, you can basically take on several colors at the same time. Note: 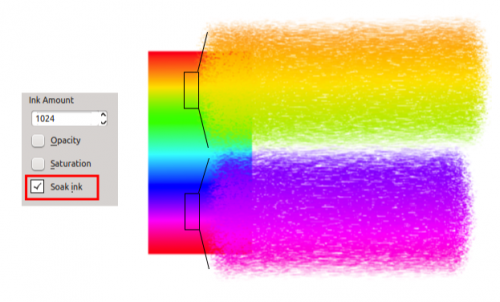 Be aware that this feature is a bit buggy though. It's Supposed to take the color from the current layer, but some buggy behavior causes it to often use the last layer you've painted on (with a non-Hairy brush?) as source. To avoid these weird behaviors, stick to just one layer, or paint something on the current active layer first with another brush (such as a Pixel brush).

Well, I'm not sure how to explain exactly, here are a few settings instead:

Notice that I often use this brush with Painting Mode -> Build Up (shown here) and Multiply Mode (top bar). This combination basically allows the brush to take on more "depth." Just remember to reduce the opacity. Various effects can also be obtained by setting Size and Opacity to Fuzzy.

You can also make use of the Soak Ink feature to get a sort of blending brush, as shown in the last example.

Apparently, the Hairy brush is derived from this brush. Now, all of Krita's brushes have a great variety of uses, so you must have tried out the Chalk brush and wondered what it is for. Is it nothing but a pixel brush with opacity and saturation fade options?

In the end I asked the developers, and they explained that in fact, this brush uses a different algorithm than the Pixel Brush, and they left it in here as a simple demonstration of the capabilities of Krita's brush engines.

So there you go, this brush is here for algorithmic demonstration purposes. Don't lose sleep because you can't figure out what it's for, it Really doesn't do much. For the sake of description, here's what it does:

Yeah, that's it, a round brush with some chalky texture, and the option to fade in opacity and saturation. That's it.


This page was last edited on 16 February 2013, at 17:51. Content is available under Creative Commons License SA 4.0 unless otherwise noted.