See the video on how to make a box plot in LabPlot.

A box plot (also known as a box-and-whisker plot) provides a quick visual summary of four important aspects of a distribution of values contained in a data set:

Elements of a box plot: 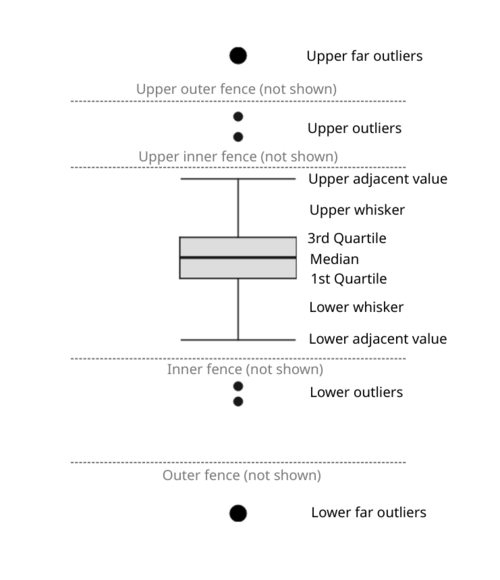 With these definitions at hand we can use a rule of thumb to attempt to label or identify and plot potential outliers:

Note, however, that these rules are just handy guidelines that don't necessarily substitute any knowledge and good judgment.

Box plots are most useful for emphasizing summary statistics but convey no information about whether there are, for example, multiple peaks, gaps or clusters in the distribution. To overcome their misleading potential, all data points can be added on top of boxes, using jittering (adding random noise over the data points) to avoid over-plotting.

Furthermore, in addition to jittering, a combined visualization of histogram and box plot can be used to provide more insights. The example below shows five datasets (taken from "same stats, different graphs") having completely different distribution but leading to the same box plot visualizations:

Here, jittering together with histograms helps to reveal the different distributions.

Box plots, laid out side by side, allow visual comparison between different batches of data in four aspects regarding level, spread, shape and potential outliers. The notches on the sides of box plots permit a more refined comparison by providing a rough measure of the significance of differences between medians. They define a confidence interval around the median that has been adjusted to make it appropriate for comparisons of two boxes. More specifically, if the notches of two boxes do not overlap, we can be confident at roughly the 95% level (this is "strong evidence") that the two medians are different. 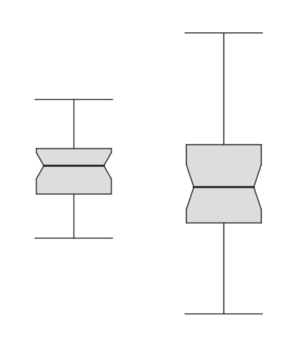 In the example above, there is no strong evidence for the difference between two medians because the notches overlap.

We can also draw attention to the difference in size of the data sets by using variable width box plots. The width of each box plot can be made proportional to the square root of the number of data points (n) contained in each data set, as shown in the example below. 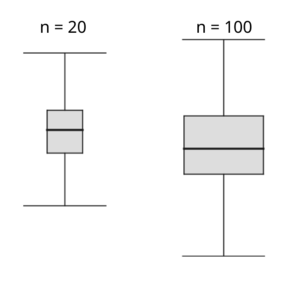 The below picture acts as a showcase of what is currently possible in LabPlot. 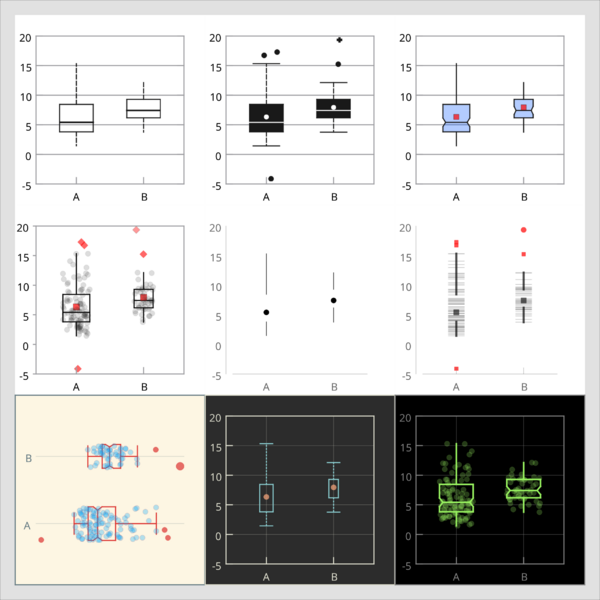 
This page was last edited on 22 February 2022, at 17:36. Content is available under Creative Commons License SA 4.0 unless otherwise noted.