One of digiKam’s lesser known features is the ability to link scripts to notifications. At first sight, this may seem like a rather obscure functionality, but it can be put to some clever uses. Say, you want to keep a portfolio of selected photos on a mobile device. Resizing multiple photos to a specified size to make it easier to view them on the mobile device and transferring the processed photos from digiKam to the mobile device manually is not very practical. And this is where the ability to trigger scripts via notifications can come in handy. You can attach a simple Bash script to the Batch queue completed notification, so it’s triggered automatically when the Batch Queue Manager tool is done processing photos.

The Bash script is very simple, indeed. It uses the rsync tool to copy the processed photos from the source directory (in this case, it’s /home/user/Photos/Processed) to the /DCIM/Camera directory on the mounted SD card:

Paste the code above into an empty text file and save it as a postprocess.sh file (don’t forget to replace the example paths with the actual paths to the source and destination directories). Make then the script executable using the chmod o+x postprocess.sh command. 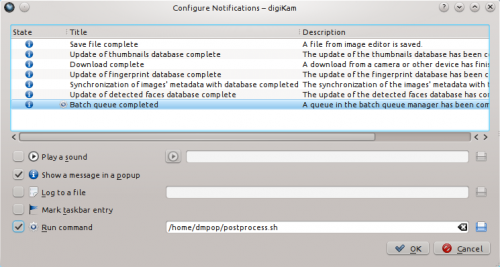 In digiKam, choose Settings -> Configure Notifications and select the Batch queue completed item. Tick the Run command check box, and enter the path to the postprocess.sh script in the appropriate field. As you might have guessed, this links the script to the notification, so the script is triggered as soon as the batch operation is finished.

Next, create a tag (e.g.,transfer) in digiKam and assign it to the photos you want to transfer to the mobile device. Alternatively, you can use a specific color label for that. Use then the Filter right sidebar to display the tagged or labelled photos, select them, and press Ctrl + B (or choose Tools -> Batch Queue Manager) to add them to a new batch queue. In the Queue Settings section, click on the Target tab and select the Photos -> Processed sub-album. Under the Base Tools tab, double-click on the Transform -> Resize tool to add it to the Assigned Tools section. In the Tool Settings pane, specify the desired length. You can choose between several presets, or enable the Use Custom Length option and specify the desired length.

Hit then the Run button, and once the batch operation is completed, the assigned Bash script copies the resized photos to the mounted SD card.

In other words, you can do all kinds of clever tricks by linking scripts to notifications.


This page was last edited on 13 July 2011, at 15:45. Content is available under Creative Commons License SA 4.0 unless otherwise noted.