If you want to install digiKam on Windows, you have two options: you can either compile the application from the source code or you can use the KDE Windows installer. The latter approach is by far the easiest one, but there is a drawback: the installer usually includes an older version of digiKam. If you can live with that, and you don’t feel like getting your hands dirty with compiling digiKam from the source, then the KDE installer is the way to go.

First off, create a new KDE directory on your hard disk, grab then the KDE installer from the KDE on Windows project’s Web site, and move it into the created directory. Launch the installer, select the Install from Internet option, and press Next. 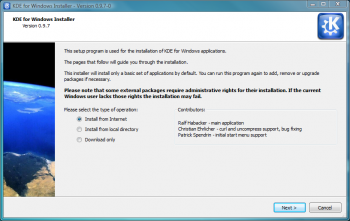 In the Installation Directory field, enter the path to the KDE directory, and press Next. Select the End User option in the Install Mode section, and MSVC 32Bit from the Compiler Mode section.

Keep the settings in the next several screens at their defaults. When you reach the Download Server Settings screen, choose the www.winkde.org server, since it offers the newest as well as older versions of the KDE bundle. Press Next and find the version of KDE that contains the digiKam and kipi-plugins packages. Select then both packages, and press Next. Hit the Next button once again, and the installer does the rest. Wait till the installer has finished downloading and installing the software, press the Finish button, and you are done. Now you can launch and use digiKam as any other Windows application.

Here is a tutorial for compiling digiKam from source


This page was last edited on 8 March 2014, at 18:09. Content is available under Creative Commons License SA 4.0 unless otherwise noted.