Note
The original image used in this tutorial can be found here.

This is the second part of tutorials aimed at showing how to use KDE's photography tools (namely ShowFoto and/or Krita), to process, edit and fix your photographs. The first part of the tutorials showed how to interpret a histogram, and how to use the levels tool. This tutorial will show you how to use a more advanced tool, called the Curves Adjust tool. It's much more powerful than the levels tool but requires more patience and practise to get good results.

So lets begin. This time we have this photo, kindly donated for the tutorial by Jos van den Oever, from his akademy 2008 photos.

The problem in this photo again, is that there are parts of the image that are very dark. The two people are clear in the photo, but the background is so dark that we cannot actually see the pub's details. Let's see what happens if we try using the levels tool, as we learnt in the first tutorial: 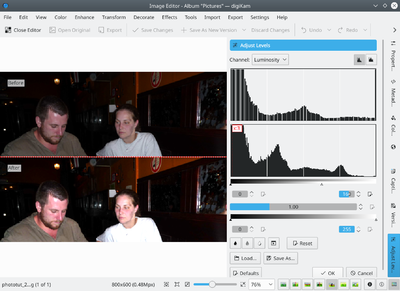 Why does this happen? Because the photo scenario had a very High Dynamic Range. i.e. it had objects from very dark (background) to very bright (illuminated by flash).

In this sort of images, if we try moving the input sliders of the levels tool, we will delete part of the photo's gray level information, losing details, and the result isn't nice.

So what to do now? We can use the Curves Tool from the menu Colors -> Curves Adjust...: 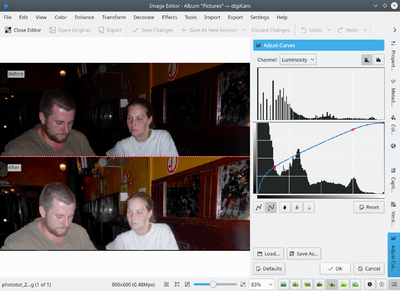 The difference is in the way the control works. In this tool, the input histogram has a diagonal line in it. Clicking on it with the left button of the mouse, adds control points. You can move those control points up or down. The result, as shown in the picture above, is that the gray levels from the horizontal axis are converted into the gray levels in the vertical axis.

So, lets press OK and see what we get of it: 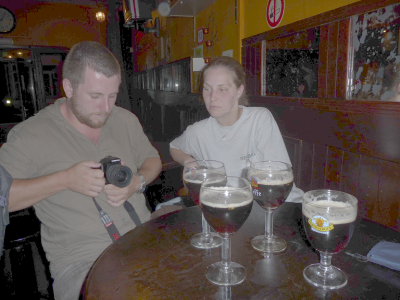 We have managed to make the shadows brighter, and now the pub is more visible, but the image is now a bit washed out. As if it were too bright all over the place. Can we do something? Sure, lets try the levels adjustment again: 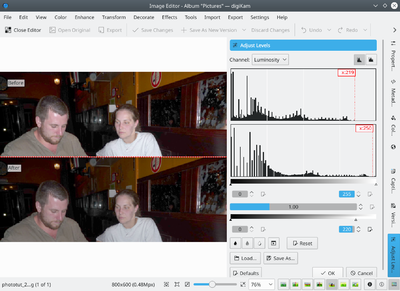 Now that the shadows were adjusted using the curves, and the colors are more uniform, we can follow the method shown in the first tutorial and adjust the levels of the photo, as shown above. The histogram's main data was a bit displaced to the left, and adjusting levels, I made it cover the whole range again.

Lets see the result - Ah, now this is much better. The pub background is much more visible and the two persons are not blown: 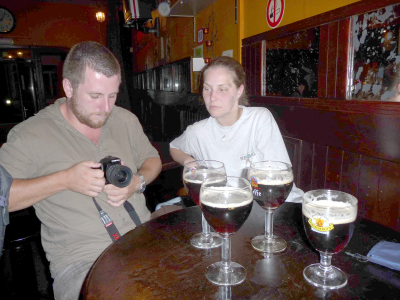 I think that's already acceptable, but if we are picky, the two people are a bit washed out due to the flash light. So, even if that goes out of the scope of this tutorial (it'll be covered in the following tutorials), lets adjust a bit the saturation and contrast in the image for a better result: 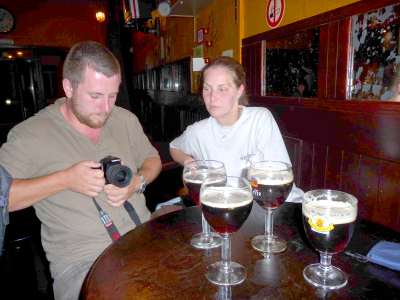 Now this image looks much nicer than the original, yes. I hope you liked this tutorial and will see you in the next one!


This page was last edited on 2 November 2020, at 05:53. Content is available under Creative Commons License SA 4.0 unless otherwise noted.