Google Picasa & Apple iPhoto are not the only applications that are capable of detecting faces in pictures. Face detection now has made its way into Linux as well. The upcoming release of digiKam 2.0 in May will feature face detection and tagging support. I compiled digiKam 2.0 beta 2 release and tested this feature and it works like a charm.

Here is how to use this feature..

In the digiKam main window, on the left, you will now see a icon with a person's face. Click that icon, from there you will get a window asking you to scan the collection for faces. You can select which folders will be searched for faces. Take a look at the screenshot below.

Now it shows all the faces that it has detected. The only thing that has to be done is to give it a “tag”, like the person's name and you will see the name appears below the People tag. 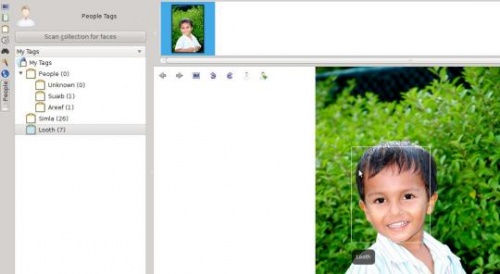 
This page was last edited on 2 March 2011, at 21:06. Content is available under Creative Commons License SA 4.0 unless otherwise noted.