Krita's color smudge brush has several common elements with the Pixel Brush, but has 2 distinct features:

The Smudge and Color functions are influenced by many other settings, so I will divided this tutorial into several parts:

I recommend at least skimming over the first part to get an idea of what does what.

Note
Just like with all my tutorials, I'm using a mouse, no graphic tablets. I have no idea how tablet users use this brush.

Many settings interact, so for the rest of this section on Overview and settings , I will be using the following benchmark settings, unless stated otherwise:

All examples in Overview and settings are obtained by modifying these values.

To better demonstrate the smudge function, I turned the color rate function off. The other settings should be pretty obvious from the pictures, so I'll spare you some walls of text. 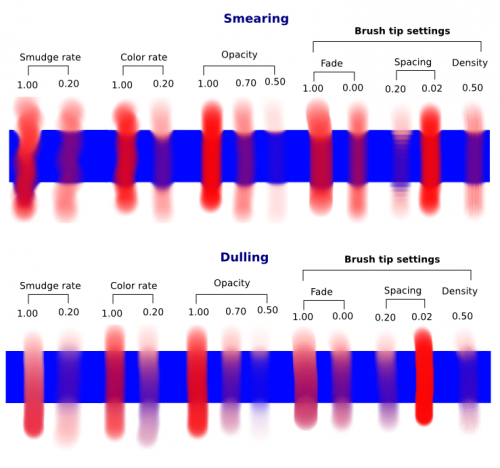 Again, most of the settings behaviours should be obvious from the pictures. Just remember to keep Opacity over 0.50.

The Color Smudge Brush has all the same brush tip options as the Pixel Brush! Since there are so many of them, refer to my Pixel Brush tutorial and my reference sheet. 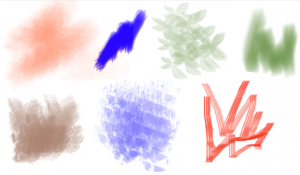 Just remember that the smudge effects are weaker when a brush tip's opacity is lower, so for low-opacity brush tips, increase the opacity and smudge/color rates.

Scatter and other shape dynamics

However, because of the Smudge effects, the outcome will be different from the Pixel Brush. In particular, the Scatter option becomes much more significant. 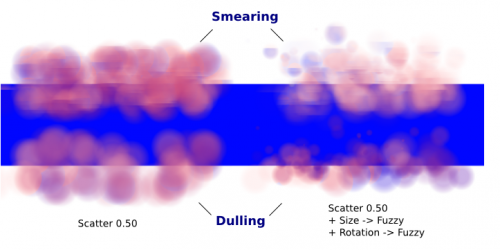 For more about the different dynamics options, I refer you to my tutorial on Pixel Brushes again.

A few things to note:

Gradient is equivalent to the Source -> Gradient and Color -> Mix for the Pixel brush: the color will vary between the colors of the gradient. 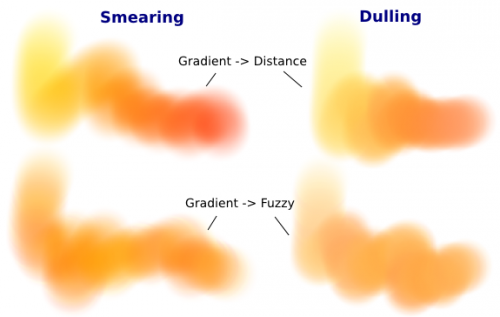 Blending Modes work just like with the Pixel Brush. The color used though is the color from Color rate.

Color Blending modes with the smudge brush are even harder to predict than with the pixel brush, so I'll leave you to experiment on your own.

Use cases: Smudging and blending

This part describes use cases with color rate off.

I won't explain the settings for dynamics in detail, as you can find the explanations in the Pixel Brush tutorial.

When Color Rate is off, one of the biggest issues with Color Smudge Brush is how they deal with locked transparency areas.

When you want to avoid drawing out of an area with the pixel brush, you just lock the transparency area.

However, this becomes a problem with the Color Smudge Brush (see right) with color rate off: what happens is that it "picks up" a black smudge from outside the locked area instead.

Of course, you rarely want to smudge a locked edge, but this is a problem when you are smudging Near the edge, or use Scatter. 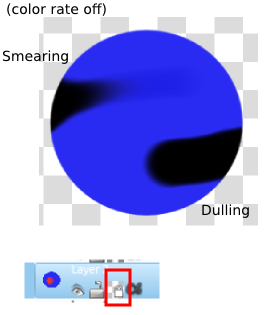 The solution is to use the Alpha-inheritance trick:

You can smudge near the "edges" of this setup safely, because it isn't the true edge.

If this isn't clear enough, refer to my layer management tutorial. 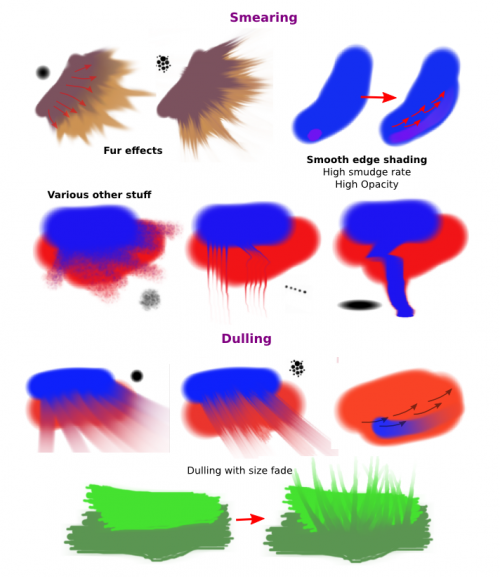 When using lower opacity brush tips, remember to "compensate" for the less visible effects by increasing both Smudge Rate and Opacity, if necessary to maximum.

Some settings for Smearing

Some settings for Dulling

In this case, what I refer to as "Blending" here is simply using one of the following two dynamics:

In fact, the Color Smudge brush is not a blur brush, so smudging is not a very good method of "smooth" blending. To blend smoothly, you'll have better luck with:

I've tried to achieve smooth blending with Color Smudge brush by adding rotation and scatter dynamics, but honestly they looked like crap.

However, the Color Smudge brush is very good at "textured blending": 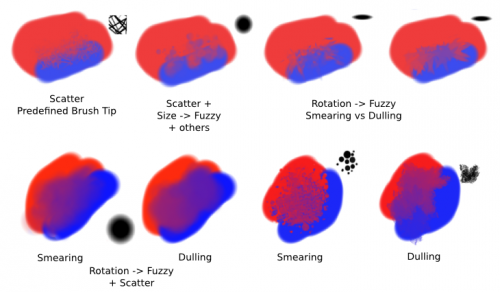 Basically you can paint first and add textured transitions after.

For this last section, Color Rate is on.

Before we get started, notice that you have several possibilities for your set up: 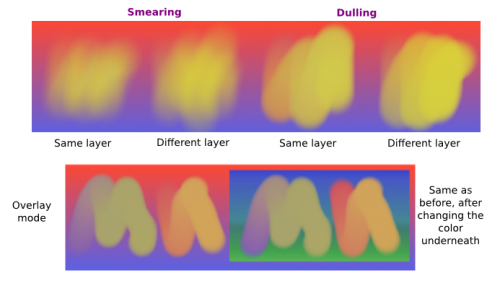 The Color Smudge Brush blends with transparency. What this means is that when you start a new, transparent layer and "paint" on this layer, you will nearly always get less than full opacity. 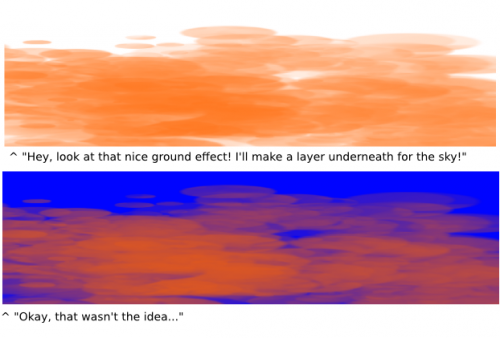 The solution is pretty simple though:

Suppose you want more or less smooth color transitions. You can either: 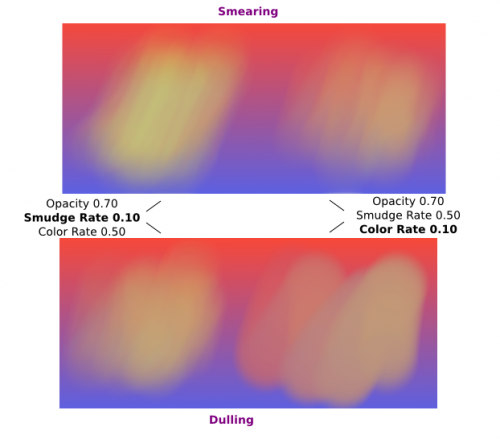 This remains, in fact, a so-so way of making smooth transitions. It's best to build up intermediate values instead. Here:

Many of the included color smudge brush presets produce a thick oil paint-like effect. This is mainly achieved with the Smearing mode on. Basically: 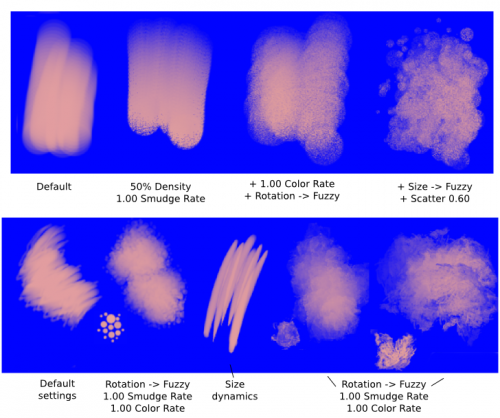 One thing I really like to do is to set different foreground and background colors, then turn on Gradient -> Fuzzy. Alternatively, just paint with different colors in succession (bottom-right example). 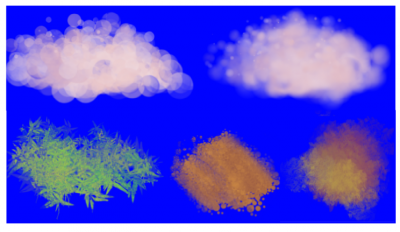 Here's some final random stuff. With pixel brushes, you can get all sorts of frill designs by using elongated brushes and setting the dynamics to rotation. You won't get that with Color Smudge Brushes. Instead you'll get something that looks more like... yarn. Which is cool too. Here, I just used oval brushes and rotation -> distance.

When I say "digital watercolor", it refers to a style often seen online, i.e. a soft, smooth shading style rather than realistic watercolor. For this you mostly need the Dulling mode. A few things: 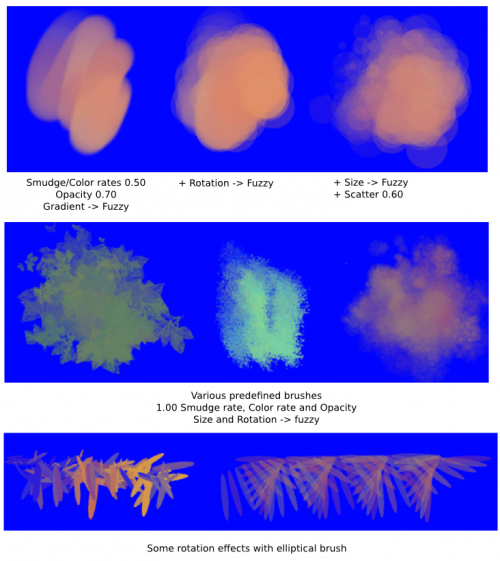 If you want even smoother effects, well, just use Blur. Gaussian blur to be exact.

And there you go. That last little trick concludes this tutorial.


This page was last edited on 5 February 2013, at 17:50. Content is available under Creative Commons License SA 4.0 unless otherwise noted.