One of the things that bothered me during the first few days of using digiKam is that the thumbnail loading speed was slow, given that I have been a Picasa user for a long time. Picasa has a thumbnail loading speed like no other image management software. However this is due to the fact that Picasa is developed by Google, a multibillion dollar company who has all the money in the world. Nevertheless digiKam can also load thumbnails quite fast, but still not as fast as Picasa.

When you install digiKam for the first time it creates two databases, one for images which carries all the information about the images in your library and the second for thumbnails. By default thumbnails are generated as the folders are being accessed. However you can generate the thumbnails by using a few clicks with your mouse.

After installing digiKam and showing it the root folder where you have kept your images, it is very simple. What you need to do is, go to Tools and select the option Rebuild All Thumbnails and it will give you two options. 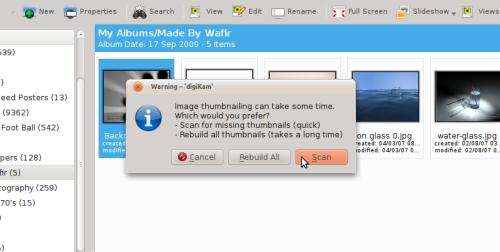 1. Scan
This option will scan for missing thumbnails in your library and generate them. This process is fast

2. Rebuild all
this option scans all the images in your collection and generates the thumbnails – this process is slow and time consuming.

After running one of the above you will feel that the thumbnails are now loaded almost instantly when using digiKam. Doing this is great and it increases the performance of digiKam.


This page was last edited on 2 March 2011, at 17:21. Content is available under Creative Commons License SA 4.0 unless otherwise noted.