XMPP or Jabber (these words actually mean the same) is the name of an open, decentral network protocol which is used for instant messaging. It is designed as a server-client-infrastructure with many servers all over the Internet, where everyone can get an account. The servers are normally connected to many clients on one side and to other XMPP-servers of the Internet on the other side. Let's invent a small example to explain how it's working:

Romeo loves Juliet and wants to communicate with her through the Jabber network. He can write messages from his client (which is connected with montague.net) to his girlfriend, whose client is connected to a server called capulet.com.

When he registered an account on a server, he chose a so-called JID (Jabber-Identifier). This JID works basically like an E-Mail-Address and is connected to the server's name with an "@". An example for Romeo's valid JID is [email protected]. 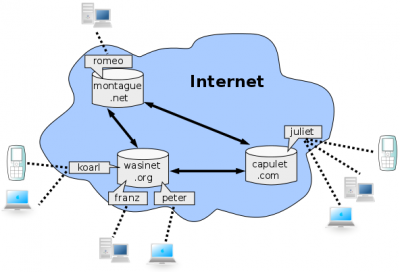 Visualization of the Jabber network

Jabber/XMPP is of course capable of a lot more services (e.g. end-to-end encryption of the messages, voice- and videochat, groupchat), which the tutorial will partly introduce later.

Two very big instant messaging providers use Jabber/XMPP on their servers in the background: Google Talk and facebook chat. Accounts within these systems can be used just like normal Jabber accounts in Kopete. Details will be explained later or can be found at these provider's websites.

With this information we can begin with the main part tutorial: How to set up a working jabber-client and which nice features Kopete has got.


This page was last edited on 1 December 2010, at 20:14. Content is available under Creative Commons License SA 4.0 unless otherwise noted.