digiKam comes with a nifty batch utility that allows you to convert RAW files to the DNG format. The question is, of course, why you would want to do that. After all, digiKam can handle RAW files without any problem, so what’s the point of adding one more step to your photographic workflow?

As you might know, RAW is not a file format, but rather an umbrella term that describes multiple file formats controlled by multiple hardware manufacturers. The RAW formats themselves are specific to digital camera manufacturers. For example, Canon cameras store RAW files in the CR2 format, while Nikon cameras use the NEF format. Besides being proprietary, RAW formats are often poorly documented and encumbered by patents.

The Digital Negative (DNG) format introduced by Adobe Systems, Inc in 2004 is designed to overcome these shortcomings by providing an open, well-documented universal format for storing RAW files. If you would like to know more about the DNG format, the DNG articles and links Web site provides a wealth of valuable information on the topic.

Being an open and well-documented format, DNG is suited particularly well for long-term archiving of digital photos. Of course, the CR2 and NEF and other RAW formats are widely adopted and supported, so they are not going away anytime soon. But there is no reason why you shouldn’t save your RAW files in the DNG format to be on the safe side. After all, storage is cheap nowadays, and the DNGConverter utility makes it supremely easy to convert RAW files to the DNG format. 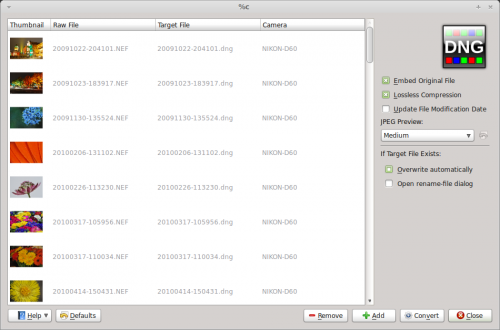 Using DNGConverter couldn’t be easier. Launch the utility, add the RAW files, specify a few options, and hit the Convert button. For complete peace of mind, you might want to enable the Embed Original File option which embeds the source RAW file into the resulting DNG file.


This page was last edited on 16 February 2011, at 11:12. Content is available under Creative Commons License SA 4.0 unless otherwise noted.