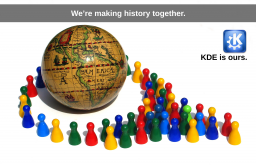 KDE started life as a desktop environment. As activities have grown, KDE is now an international team that creates Free and Open Source Software.

What this means in practice is that the many programs from the KDE community work together to give you the best possible computing experience. Does that mean you can't use a KDE application if you don't use the KDE desktop? Not at all. With the help of one or two extra libraries the applications can be used on almost any desktop. What's more, some of that software no longer runs only on Linux - some of the new tiny devices, smartphones and internet tablets, have KDE applications!

There are a variety of programs to suit any user's needs, from simple yet powerful text editors, to rocking audio and video players, to the most sophisticated integrated development environment. Plus, KDE applications follow a consistent look and feel across the desktop, giving you a comfortable and familiar experience when using any KDE program. Every six months a new, updated version of a huge number of applications is released - and that's known as the Software Compilation (SC). Some other applications don't update at the same time, but release new versions independently.

KDE software has several other features that makes it a top-class working environment, such as:

KDE software isn't just any software. It is Free Software. As a user, this is an important fact, even without getting deep into technical or legal considerations. Why? Because as free software, you are free to use KDE wherever you want and in whatever manner you want, no activation keys and no installation limits. And you're free to share it with others as well! So not only do you have in your hands great and powerful software, but you can also give your family and friends the opportunity to enjoy it, too. 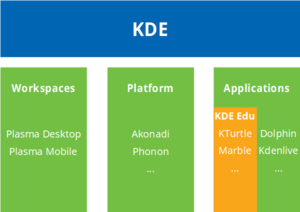 KDE is a huge community of people who create software. We all have in common that we're building upon an infrastructure we have developed over the years: the KDE Platform.

More information can be found on KDE TechBase

And it doesn't stop there! The KDE community has lots more to offer!


This page was last edited on 25 November 2018, at 15:03. Content is available under Creative Commons License SA 4.0 unless otherwise noted.